In early 2019, Coca-Cola in Australia made an ambitious commitment to make 7 out of 10 of its plastic bottles entirely from recycled plastic by the end of the year.

It’s the largest commitment to using recycled plastic in the Australian beverage industry. But it didn’t come without its challenges.

While 100% recycled plastic had previously been used to bottle still beverages, it had never been successfully achieved in carbonated drinks at scale in Australia.

Pressure inside a soft drink bottle is up to three times the pressure of a car tyre, which means the bottles for carbonated drinks need to be much stronger than the bottles for still beverages, such as water.

Coca-Cola Amatil, the bottler and distributor of Coca-Cola products in Australia, has worked on Coca-Cola’s recycled PET (rPET) program since 2010.

Through extensive research, innovation and design, the team were able to overcome the challenge of using 100% rPET to package carbonated beverages, creating smart bottle designs that factor in the unique qualities of recycled plastic.

Heading up this challenge was Coca-Cola Amatil Futurework’s Packaging Manager Craig Walker. This challenge became a personal passion for Craig, who worked in his home garage at times, tinkering with design concepts when he wasn’t on the production line in Northmead, NSW.

“We’re always looking to address and reinvent our packaging to make it more sustainable, where plastics are renewed and reused. We’re also fortunate that Coca-Cola Amatil has invested in the latest production technology, which has accelerated our rPET success story,” said Walker.

“Key to this success was the shift to making all our bottles in-house. This allowed us to integrate our recycled plastic goals from the very beginning of the design process. From there, it was a continuous process of innovation, trial and error to get it right, sometimes even in my garage at home with my son by my side.

“After nine years, to see this project finally come to light was incredibly rewarding and a real career highlight. To be the first Coca-Cola bottler in the world to create 100% rPET packaging for both still and carbonated beverages is proof that we really are at the forefront of innovation right here in Australia,” continued Walker. 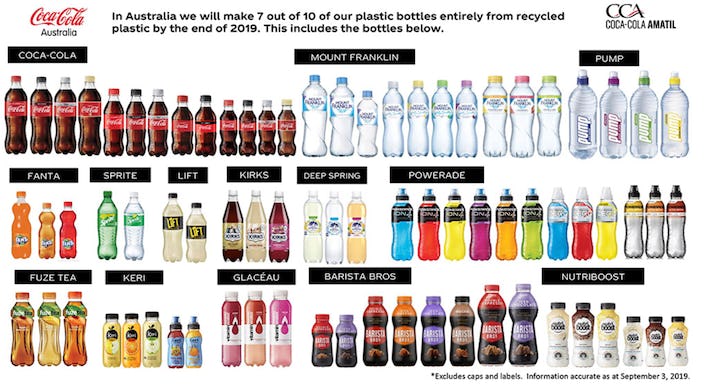 This commitment represents the single largest increase in the use of recycled plastic in Coca-Cola’s history. Importantly, it will see Coca-Cola avoid using around 10,000 tonnes of new plastic each year from 2020.

It also means that by the end of 2019, Coca-Cola in Australia will have taken huge steps to help the company reach its global World Without Waste vision to use at least 50% recycled material in its packaging by 2030.

Impact on Coca-Cola Amatil’s production line has been minimal. Walker says the only change has been the inclusion of a ‘fast reheat’ addition, which lowers the amount of energy used to heat up PET in the production process.

“There has been no impact on our production sites and PET does not require any special treatment in terms of storage. The only difference in 100% rPET, is the minimal variability in colour from batch to batch, as the resin created has had a previous life.”

Whilst these are big steps, Coca-Cola acknowledges there is still work to do. For some of its larger pack sizes, there are technical limitations that the Coca-Cola Amatil team is working hard to solve.

Alongside the landmark commitment to using more recycled plastic, Coca-Cola will continue to focus its efforts on collection and supporting a local circular economy in Australia.

Coca-Cola Amatil has a 40-year history of operating South Australia’s collection scheme and is the government-appointed coordinator for all schemes in operations around Australia – in NSW, QLD, NT, ACT and WA. Coca-Cola also support grassroots collection schemes, like Citizen Blue, to bring more recycling bins to events and office buildings across NSW.

All of this activity helps reduce litter (the rate of littered beverage containers on coasts is 40% lower in states with container deposit schemes) and supports the use of recycled plastic in Coca-Cola’s packaging, giving Coca-Cola bottles the best chance of being used again and again.

Error Occurred While Processing Request The web site you are accessing has experienced an unexpected error.
Please contact the website administrator.